A fictitious report titled "Inauguration of Torrens' Statue" in the centre of Victoria Square is in the Register,
2 April 1859, page 3a.
"Land Transfers Simplified - Memorial to Sir Robert Torrens" is in the Register,
25 July 1925, page 13a,
17 and 18 August 1925, pages 9g and 8d.
Also see Place Names - Torrens Park

Information on the statue of Niobe in the Botanic Gardens is in the Observer,
7 September 1867, page 6f. 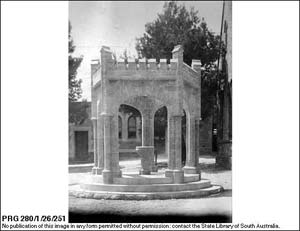 A proposed statue in memory of the late Dr Bayer is reported in the Register,
18 November 1868, page 2h and
a proposed monument to South Australian explorers in the Advertiser,
27 February 1873, page 2f.

A suggestion for a memorial to be erected to commemorate the foundation of South Australia is in the Register,
4 August 1881 (supp.), page 3d.

There is no doubt whatever that Burns was an unmitigated plagiarist. Many old ballads, and some modern ones, brought grist to his mill... I wonder if those half-dressed gentlemen who sang "Auld Lang Syne" so enthusiastically... knew that they were singing his most bare-faced theft. Here is the original published by James Watson in 1711...

Should old acquaintance be forgot,
And never thought upon?
The flames of love extinguished
And freely past and gone?
Is thy kind heart now grown so cold
In that loving breast of thine,
That thou cans't never once reflect
On old long syne.

If e'er I have a house my dear,
That truly is called mine,
And can afford but country cheer
Or ought that's good therein,
Though thou wert rebel to the King,
And beat with wind and rain,
Assure thyself a welcome, love,
For old long syne.

A number of students in the Adelaide University were, in connection with the unveiling..., guilty of conduct which would have discredited so many untutored street Arabs... Some of the guilty and foolish, but now apparently penitent young fellows, have for a long time done much to degrade their Alma Mater... If [their conduct] had been displayed by newsboys in the street [it would] have probably led to police proceedings...
(A photograph is in the Chronicle, 8 August 1903, page 41.)

"Australian History, Monuments and Other Things" is in the Register,
2 July 1901, page 4c.

A proposed statue to Sir Walter Hughes is discussed in the Advertiser,
30 August 1904, page 4f.
A photograph is in the Chronicle,
8 December 1906, page 27.
Also see Place Names - Moonta.

The man [G.F. Angas] to whom it was proposed to erect the monument was one of only many who in the early days had exploited this country for their own benefit and in giving to charity he was only making a reasonable return for what he had taken from the public pocket... [I know] for a fact that a week after Mr Angas had donated one thousand pounds [$2,000] to a certain institution... a notice had been issued to his employees intimating that their wages would be reduced by 2/6 [25 cents] per week...

A proposed memorial to the late Queen Alexandra is discussed in the Register,
8 December 1925, pages 8e-9d.

Photographs of the city's statues are in the Chronicle,
15 December 1917, page8 (supplement).