If Cobb and Co can run a coach
For ninepence to the Bay,
Why should Port railway passengers
Have twice as much to pay.
(Register, 10 August 1869, page 2h.) 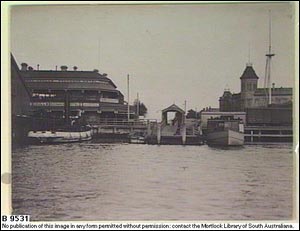 An Essay of Port Adelaide Ferries

The township of Bridgewater was created by Alfred Watts in 1855 on "the nearest high ground to the Port" which he declared possessed an "unlimited supply of fresh water...", while its neighbour, Birkenhead, was the joint creation of Thomas Elder and John Hart in 1861. They claimed it to be a "healthy site" in the immediate vicinity of Port Adelaide.

In 1875 a disgruntled citizen suggested that "this part of Adelaide is nothing more than a long, narrow estuary creek of shallow water" and went on to have a tilt at the authorities in the City for their lack of interest in the Port:

It is the old story of "vested interests". The wealth of the colony is centred in Adelaide... These are not at all interested in the old Port... and their unanimity for one object influence the Government and are predominate in the House of Assembly, and so it is they have kept things as they are and oppose all change...

However, some Portonians with an eye for business, profit and incidental progress had different ideas for, by 1877, it became obvious that some cheap form of transportation was necessary across the river to Port Adelaide for the convenience of residents of the two towns. Accordingly, on 4 January of that year a meeting took place at the Ship Inn under the presidency of the Mayor, Mr David Bower. Thirty interested people attended and Mr Christie explained the origin of the scheme and referred to recent Government promises to erect approaches on both sides of the Port River. In addition to Mr Christie other foundation members of the proposed company were Messrs J. Walker, D. McKendrick, R. Lindsay, W. Harris and J.M. Sinclair.

Within a short time the Port Adelaide Ferry Company was founded and a tender accepted for the construction of a ferry boat by Messrs McCallum (or McAllan) Smith and Co. The specifications provided for a vessel 40 feet long, 10 feet abeam in the midships diminishing to six feet. Seats were to be fitted on both sides to accommodate 60 passengers and, to avoid the need for turning the ferry, it was to have a screw propeller and rudder at each end.

To provide access and egress the existing landing steps at the end of Commercial Street were extended and at Birkenhead a 200 feet long pier was constructed. The one-way fare was set at one penny per trip.

The trial run of the ferry, appropriately called Unique, took place on 26 October 1877 and a few days later the ferry service was formally opened by the former Colonial Treasurer, Mr R.D. Ross.

From the start it was well patronised and, in June 1878, a dividend of two shillings a share was declared. Earlier, on New Year's Day, 1878, the ferry's resources were "severely taxed" for 4,300 passengers were accommodated and:

The man in charge appears to have been roughly handled and in the rush he was forced under foot and bruised; his watch was damaged and the chain lost... [After this unfortunate event] a policeman was stationed on the steps to prevent overcrowding. In later years the company was plagued with problems until, finally, due to lack of patronage the company was wound up in 1890 when, in a reflective statement, it said that the service was "at first conducted by steam ferry but latterly by boats."

Information on boatmen and their charges is in the Register,
20 April 1854, page 2e:

To charge a shilling for a journey of a hundred yards is coming it a little too strong, even for gold-digging times.

The launching of a ferry punt is reported in the Register,
5 October 1854, page 3d.

A deputation urging the need for a ferry to and from Le Fevre Peninsula is reported upon in the Advertiser,
24 January 1876, page 6f.

Information on the Port Adelaide Steam Ferry Company is in the Express,
24 November 1879, page 2e.

The man in charge appears to have been very roughly handled and in one rush he was forced under foot and bruised; his watch was damaged and the chain lost...

A complaint about a sandhill impeding traffic is in the Register,
28 July 1838, page 4:

Those whose business takes them to the Port must have witnessed the treatment of the poor bullocks in bringing a load over the sand - what swearing, tearing and lashing there is!

[It is] a handsome commodious vehicle built by Mr Matthews of Weymouth [sic] Street for our "crack whip", Mr Charles Tanner. It is adapted for the comfortable conveyance of twelve passengers inside, and five, besides the driver, outside.

Further information on early transport to and from Adelaide is in the Register,
6 February 1918, page 9b.

A letter in respect of inherent dangers of "Port Carriers" operating at night is in the Register,
28 April 1868, page 2h:

It was not until the public cried "shame" from the frequent loss of life that gas lamps were erected on the wharfs at Port Adelaide. Must we shut our eyes to the necessity of all drays having lights till more life is sacrificed...

"Tram and Train and the Port" is in the Register,
10 May 1929, page 6c.
Also see Adelaide - Railways and Adelaide - Electric Trams

A proposed railway from Adelaide is discussed in the South Australian Record,
8 May 1839, pages 188 and 192.

An obituary of Isaac Puddy, "the first superintendent of the Port Adelaide railway", is in the Register,
10 November 1905, page 4h - it includes historical information on the Port railway and others in South Australia.

An obituary of George Poyzer, "fireman of the first locomotive that ran from Port Adelaide to Adelaide", is in the Observer,
3 August 1907, page 40e.

A complaint, under the heading "The Port Railway and Water-Cresses", is in the Observer,
23 August 1856, page 7c.

Reminiscences of the early railway are in the Register,
30 October 1920, page 12g.

Historical information on the first railway is in the Register,
22 July 1927, page 15c.

An irate passenger airs his grievances on 23 February 1875, page 6d:

... It requires a prize fighter to get a ticket and when one is obtained it requires two prize fighters to get one person into a carriage - to be almost smothered to death... The traffic has quite outgrown the capacity or capacities of the present wooden-headed officials...

Information on the railway station is in the Observer,
3 April 1875, page 8b.

An example of nefarious passenger practice on the railway is in the Register,
12 April 1878, page 5f,
while information on the railway station appears on
20 June 1881, page 4g.

Railway matters at Port Adelaide are discussed in the Express,
17 April 1883, page 3e.

Improvements in the Port Adelaide railway station yard are discussed in the Register,
17 January 1884, page 7a,
6 December 1884, page 7b.

An interesting letter on "Body Smuggling" on the Adelaide railway is in the Register,
29 December 1888, page 7c.

The stables used by shunting-horses are described in the Register,
27 and 28 January 1892, pages 4h and 5g.

A list of station-masters on the Port line and their wages is in the Register,
13 December 1893, page 5b.

Trains in the streets are discussed in the Advertiser,
27 November 1893, page 6c.

"Grievances at the Railway Station" is in the Weekly Herald,
11 November 1899, page 7b.

Proposed electrification of the railway is discussed in the Register,
22 June 1904, page 7c.

A proposed tramroad to Adelaide is discussed in the Register,
21 June 1888, page 3.