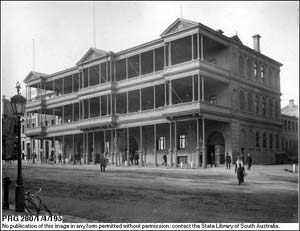 Information on "Early Days of the Black Bull" is in the Register on 9 April 1910, page 11a -
the proprietors set up a sign which read:

The bull is tame, so fear him not,
So long as you can pay your shot.
When money's gone and credit's bad,
That's what makes the bull go mad.

(This was emphasised by a picture of a peaceful bull on one side of the board and another of a mad bull on the reverse side.)

An obituary of Mrs Mary Moseley, manageress, is in the Register,
15 October 1919, page 6h.

The Globe Inn is described in the Chronicle,
6 February 1864, page 2a.

A "Fracas at the Globe Inn" between Mr Henry Alford and Mr Daniel Fisher, "the recently-elected member for East Torrens", is reported in the Observer,
9 May 1868, page 3b.

Information on the Newmarket Hotel is in the Register,
17 July 1883, page 4g.

A fatal accident at the Norfolk Arms is reported in the Observer,
13 September 1897, page 13e.

Information on the remodelling of the hotel is in the Register,
15 March 1916, page 4e.

"Hindley Street Amusements" at the Royal Admiral Hotel are described in the Advertiser,
18 January 1908, page 14a.

The Southern Cross Hotels are discussed in the Register,
21 August 1919, page 5f.

Biographical details of J.H. Willis, manager of the SA Hotel, are in the Register,
22 February 1927, page 8h.

The dangerous but seductive practice of nobbler-drinking during the forenoon [which] has reached to an extent in this province is fearful to behold, and although its baneful results cross our path in every direction, seldom is any voice heard in its reprehension. The pulpit is silent upon it, the press reports the daily - almost hourly - fearful accidents and loss of life caused by it, but it stops there...
(Register, 24 July 1858, page 3.)

In the first two decades of settlement nearly everybody partook of alcohol in some form or another for it was quite common practice, even with perfectly temperate people, to offer a visitor sherry and biscuits at a morning call. An afternoon visitor, if of the sterner sex, was not asked to take tea, but wine and biscuit, while a glass of whisky toddy was deemed the correct thing before going to bed.

In later years in similar conditions, nearly everybody drank tea or coffee and those men who ventured to beer or wine were viewed with surprise, if not, indeed, with disapprobation. I am certain in my own mind that here has been a wonderful in the improvement in the habits of all classes of society in relation to drinking.

They used to begin early and keep it up late, while in Adelaide it was quite a custom, even in the morning hours if a piece of business was brought to a successful conclusion, for the parties to cement their satisfaction by making a visit to the nearest public house. It seemed to be almost the rule in those days, but it is now the exception:

Drunkenness is mournfully prevalent at this neighbourhood. There are too many hotels here... some of them are conducted in a respectable manner, in others every art is used to induce men to drink... Our young men are being hurried to destruction at a railway speed... I am well assured that in this place there will not be another such disgusting scene enacted as a man being drunk, drowned and buried in a day.

To a temperate man the drinking customs of society must have been the source of much annoyance to be asked to have your 'forty drops' at 11 am and throughout the day at varying intervals. To refuse to join in was almost considered to be an insult and a total abstainer was viewed with contempt or scorned with ridicule.

When I notice the improved habits of today I feel that a great change has been effected and, although my husband and I have never felt called upon to take up the role of teetotaller, there can be little doubt that much of the improvement is due to the zeal of those, both teetotal and temperate who, seeing the evil and waste caused by intemperance, have waged war against them.

The brewer's in the counting house,
Counting all his money,
His wife is in the parlour
Eating cream and honey.
The drinker is in the taproom, Dressed in ragged clothes,
Soon he will be made to see
The cause of all his woes

Reminiscences of the Half-Way Hotel on the Port Road are in the Register,
25 February 1878, page 5b.

The obituary of James Chittleborough, an early publican, is in the Advertiser,
2 March 1918, page 9h.

The opening of the Royal Oak Hotel is reported in the South Australian,
8 September 1846, page 3c.

A correspondent to the South Australian, 3 November 1846, page 5d says:

I presume it is not generally known that those who have no town residences are compelled - both for rest, refreshment and transaction of business - to go to inns, where their ears are often assailed and their feelings horrified, by the utterance of language one would think impossible to enter into the imagination, or to pass human lips, even in a brothel.

"The Duties and Responsibilities of Innkeepers" is in the Observer,
13 March 1847, page 4b.
A letter in respect of inn keeping from William Templer appears on
7 October 1848, page 3b.

A dangerous lunatic at the Royal Hotel is reported in the Observer,
9 August 1851, page 8f.

An editorial on public houses is in the Observer,
4 February 1860, page 5e.

Information on the Phoenix Hotel is in the Register,
20 August 1866, page 2d.

Information on the Saracen's Head Hotel is in the Observer,
25 January 1873, page 7b.

Information on the Freemasons Tavern, established by Henry Robinson, is in the Observer,
20 March 1875, page 7f.

Information on the old Half-Way House on the Port Road at Woodville is in the Observer,
2 March 1878, page 23f.

A new hotel and shops on the site of the old Royal Hotel is discussed in the Observer,
16 March 1878, page 20d.

A gas explosion at the Black Horse Hotel is reported in the Observer,
2 June 1878, page 11g.

A Welsh banquet at the Earl of Zetland Hotel on Saint David's Day is reported in the Chronicle,
8 March 1879, page 4e (supp.).

Sketches of private buildings and a hotel erected by Mr Vaughan are in the Pictorial Australian in March 1879.

An entertaining article under the heading "Hotel Life in Adelaide" is in the Register,
12 October 1882, page 6b.

An extension to the Tavistock Hotel is reported in the Register,
8 December 1884, page 6g;
it also has information on an earlier structure; also see
Express,
13 February 1885, page 2e.

Information on the Bristol Tavern and the Hampshire Hotel is in the Register,
13 April 1885, page 3g.

The introduction of electricity into two hotels is discussed in the Express,
22 and 23 September 1886, pages 6g and 2c.
Also see Lighting the City.

"Hotels and the Jubilee Exhibition" is in the Register,
9 March 1887, page 4f.
Also see Exhibitions.

An "automatic drink dispenser" at the Metropolitan Hotel is discussed in the Register,
2 July 1889, page 4h.

An exhibition of a "Monster Royal Bengal Tiger" at the Star Hotel is reported in the Observer,
15 August 1891, page 41e.

After the Indian mutiny of 1857 had been quelled, relief funds were started all over the world and little Adelaide added a handsome quantum thereto, the amount being greatly augmented by amateur dramatic and musical performances.

Just at this time a 'Monster Royal Bengal Tiger' was exhibited at the Star Hotel at the corner of Rosina Street, and many children were admitted to see it on payment of sixpence. This beautiful specimen, with an elephant I saw at Unley, near the Cremorne Hotel, I think constituted all that the people of Adelaide had the privilege of seeing in matters zoological in those days, and with the camel, which previously was the cause of the death of Mr Horrocks in the then so-called 'Far North', were perhaps the first cattle of their kind ever imported to South Australia.

The Sunday closing of hotels is discussed in the Observer,
2 January 1892, page 39b.

Information on the Windsor Castle Hotel is in the Advertiser,
15 June 1895, page 4h.

"Cases Against Publicans - Breaches of the Distillation Act" is in the Advertiser,
28 June 1895, page 10g.

"Hotel Nomenclature" is discussed in the Register,
5 December 1902, page 4g:

The Perseverance Hotel has a little history of its own. In the olden days an inn rejoicing in the cognomen of Labour in Vain held out the sign showing a washerwoman endeavouring, without success, to scrub the black out of a nigger's boy skin. The enterprising proprietor of a newer building went one better and put out a board entitled Perseverance in which that coon's colour had given before the virtues of the brush and soap.

The proposed change of name of the Provincial Hotel to "Mafeking" is reported in the Observer,
16 June 1900, page 29e.

"Hotel and Restaurant Employes - A Story of Drudgery" is in the Advertiser,
1 February 1907, page 8a.

Information on the old and new John Bull Hotel is in the Register,
26 October 1909, page 4h.

The aftermath of a fracas at the Gresham Hotel is discussed in the Register,
14 June 1911, pages 6e-8d.

The rescue of a woman from a disused well at the Royal Oak Hotel in Hindley Street is reported in the Observer,
20 July 1912, page 41e.

Biographical details of Carl Woltmann, hotelier, are in the Register,
1 November 1912, page 6h.

"Adelaide's New Fire-Proof Hostel - Over 360 Rooms" on the corner of North Terrace and Blyth Street is described in The Mail,
13 September 1919, page 5a.

The closure of the Majestic Hotel is reported in the Register,
5 July 1919, page 8f.

A proposal to build a hotel on the site of the Old Legislative Council building is traversed in the Register,
17 December 1928, page 10d.

Information on the Green Dragon Hotel Cricket Club is in the Register,
6 November 1929, page 9b.

In the 'seventies slaughtermen from T. Ballantyne's butcher shop on the opposite side [of the Norfolk Arms in Rundle Street] used to come in for a drink and I often exclaimed "here they come for the "butchers"".

The nomenclature of the Maid and Magpie Hotel is explained in the Advertiser,
8 April 1936, page 25b.

"Rock Tavern - Roadhouse of the Fifties" is in the Chronicle,
22 April 1937, page 47 - it includes information on Isaac Gepp.

An obituary of George Flecker, hotelier, is in the Register, 8 February 1909, page 4g.

An obituary of Miss Mary McEnhell, licensee of the Castle Inn, Hindley Street, is in the Observer, 30 October 1909, page 40a.

Information on Adelaide's lodging houses is in the Advertiser, 20March 1877, page 4c.