Mrs Hillier's Ladies School (see under next heading) in Pavilion Cottage, Currie Street, opposite to Gilles Arcade, was advertised in the Register, 20 January 1838 and ante-dates those of Rev Stow and Mr J.H. Shepherdson by some months, but Rev Stow's announcement on 29 September 1838 of his intention to open a boarding school as soon as the necessary buildings were completed, also shows that at that date he had a school which seems to have been well established and efficiently staffed. Samuel Stow, late master of a grammar school in Suffolk, England, was announced as one of the teachers at the new school - It has been erroneously stated that Samuel Stow was a brother of Rev Stow, but he had no brother of that name.

Rev Stow arrived in October 1837 and erected a tent on the banks of the River Torrens near modern-day Morphett Street bridge. Here he lived and held services as the pioneer Congregational minister of the settlement. Within a few months he moved into a hut, built by himself, which was large enough to serve the dual purpose of church and schoolroom. His boarding school occupied the site upon which the State bank premises stand at the corner of Gawler Place and Pirie Street. 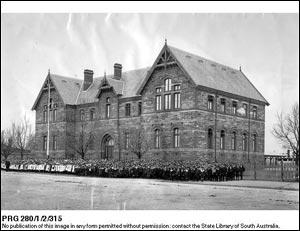 In May of 1838 an address by Mr Bonnar in the Theatre Royal, Franklin Street, was mentioned; this gentleman was probably Mr J.J. Bonnar of Mount Barker, a schoolmaster, who became a lawyer and to whom Judge J.H. Gordon was articled. In November 1838 Miss Holbrook of Carolina Place taught French, music and drawing and, by 1839, she was in charge of Trinity School, the anniversary of which was noted in the Register on 8 June 1839 - the Governor's wife, Mrs Gawler, was mentioned as patron. In 1839 Mr McGowan's school was in Coromandel Place and in 1843 it removed to Stephens Place.

In 1840 the Rev Drummond, in Angas Street, and Rev G. Skey, in Gouger Street, had schools and there were the following ladies' schools: Mrs Yeates, Gouger Street; Mrs Debney, Leigh Street; Mrs MacGowan, Grenfell Street and Mrs Williams, North Terrace. It was recorded in 1840 that £4,000 had been subscribed for a proprietary college but the collapse which caused the recall of Governor Gawler, and the strict economy of Governor Grey, set back its establishment and it was not until 7 April 1847 that its foundation was announced.

In the Southern Australian of 9 April 1841 Mr J. Noonan advertised that, 'God willing', he would open an evening school in Trinity Schoolroom and he apparently did so, but in October 1843 relinquished it.

As stated in the previous section Mrs Hillier's school was first conducted in Currie Street, but some doubts have been expressed by both Mrs Birks, grand-daughter of the original proprietor of the Register, Mr Robert Thomas, and Mr T.H. Smeaton who said:

The fact mentioned by Mrs Birks that Mrs Hillier's first school was at the foot of Montefiore Hill seems to throw light on a thing that has often puzzled me in the original plan of the City of Adelaide. Those who have seen that plan may remember that a school is shown just about where Mrs Hillier's school must have been. It is the only school shown on Colonel Light's plan of the city and I could not believe that he intended to indicate the situation of a central school that would serve the needs of the people. Mrs Birks' note makes it clear the Colonel Light plotted the position of a school that existed at the time the plan was drawn and not of a site for school purposes.

Mrs Hillier was born in England on 30 August 1800. Her children were William, Ann (married to Mr McCloud), Jane (unmarried) and John (a member of the staff of the Register). Mrs Hillier started a school in England, possibly after her husband's death. Frances, Amelia and Mary Thomas (aunt of Mrs Helen Birks) and Mr Evan K. Thomas, attended this school before they left England.

Mrs Hillier's first school was at the foot of Montefiore Hill, but afterwards removed to Currie Street where my aunts, Mary and Helen Thomas, were pupils. Later, Mrs Hillier removed to Brighton and I and my sisters, Mary and Frances, attended the school for some years...

Following Mrs Hillier's death her daughter, Ann, who had assisted at the school, opened her own school at Dorsetta Terrace, Brighton.

The prospectus of the Proprietary Academy appears in the Southern Australian,
30 August 1844, page 3b; also see
South Australian,
23 March 1847, page 4c.
Its first examinations are reported on
23 June 1848, page 2e.

Examinations at the Adelaide Grammar School are discussed in the Register on
19 December 1846, page 2d and
of the Commercial School in the Adelaide Times on
25 December 1848, page 2e and
the Albert House Academy on
16 June 1851, page 3d.

The names of licensed teachers in the city are in the Express,
30 December 1865, page 2c.

The Adelaide Training School is discussed in the Register,
12 June 1876, page 6a.

An Advanced School for Girls is discussed in the Register,
16 January 1883, pages 4e-6e.

The laying of the foundation stone of the Currie Street School is reported in the Observer,
30 August 1890, page 7a.

An inspection of city schools is reported in the Advertiser,
18 November 1893, page 6a.

The laying of the foundation stone of the Gilles Street School is reported in the Advertiser,
5 September 1899, page 7c.

The opening of a new agricultural school in the Old Exhibition Building is reported in the Register,
2 July 1897, page 6c.

Information on The Adelaide Shorthand and Business Training Academy is in the Chronicle,
30 December 1899, page 42c.
A photograph of a picnic appears on
19 November 1904, page 29.

"How the Christian Brothers Started Colleges in Adelaide" is in The News,
3 December 1932, page 4e.

Information on the Remington Business College is in the Express,
21 December 1905, page 2d.

The foundation of a School for Mothers is reported in the Register,
24 January 1914, page 16f

Information on Mr Thomas Burgan, "An Honored Educationist - One of Adelaide's Early Schoolmasters" is in the Advertiser, 18 November 1916, page 11a.

Photographs of college girls' sports are in the Observer,
9 August 1924, page 33.

A photograph of a Loreto Convent tennis team is in the Chronicle,
28 November 1935, page 38.