Adelaide - Fires and the Fire Brigade

Whether in the dead of night or in the light of day, the firebell's clang is a vibrant note that never fails to stir the pulses for, since men began to build, the cry of 'Fire!' has echoed, precursor of terror, confusion and loss. Today, any suburb of importance has its own appliances, less pretentious than those at headquarters, but adequate for all ordinary demands. In the larger country towns, too, the days of bucket and garden hose have gone. Permanent, trained part-time firemen, supported by a local auxiliary, can be summoned instantly with fire-fighting equipment. 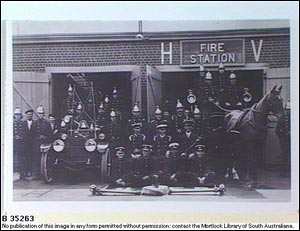 January of 1839 was the blackest month. When a spark lodged in the thatched roof of the Land Office, the fire ran like magic before the wind. In ten minutes the office was an inferno, which leapt at the Survey Office and, in half an hour, not a wall, or a post, was standing. An iron safe set in solid masonry preserved, except for charring, most of the important documents in the Land Office, while draftsmen saved original maps of town acres from the Survey Office, but Hurtle Fisher and Colonel Light lost everything, including the journal the latter had kept diligently for 30 years.

Scarcely had the flames died down before an alarm was raised again, this time at Government House. Its reed roof and wooden partitions burned like tinder and, in an hour, with its store of valuable documents, it was a heap of ashes and smouldering beams. Before the year was out the home of John Brown, Emigration Agent, was similarly destroyed, again with papers and documents.

I recall, vividly, a fire of the early 1840s. On the alarm being raised a fire bell at the police station was rung violently in a special and well-recognised manner and, at the dead of night, it could be heard all over the city. At the first clang, the water carriers, who were compelled to leave their barrels full at night against such an emergency, manned their carts without delay, harnessed their horses and urged full speed with whip and word.

The carts raced and rattled down the street, scattering to left and right men, women and children, out for the excitement of the chase, for the corporation and insurance societies offered a bonus for the first to reach the fire. Some sort of a barrel or tank was provided into which the carriers would run water from their barrels and from this the liquid was dipped out into buckets and passed from hand to hand along a line of volunteer helpers, the last person throwing it on the flames. In later and more progressive times, a double action pump, towed from fire to fire by the police, was provided, with a long, horizontal handle on either side. In the meantime the water carriers were at work, hurrying down to the ford, refilling barrels and galloping back as fast as Pegasus could fly and, when their loads were discharged, they bolted back to the river for another supply. There was real excitement in a city conflagration in those days!

The Role of Insurance Companies

With the erection of more costly buildings Adelaide developed a mind for insurance, the agents, in their enthusiasm, undertaking the maintenance of a fire brigade. Its amateur members were bravely attired in scarlet and ran up the street at an alarm, putting on their uniforms as they progressed. Often they arrived when a building was long past salvation and it was no novelty for them to be greeted with hisses and groans by a long-gathered crowd.

Things reached such a pass that when the police engine took nearly two hours to reach the burning Union Bank at Port Adelaide in 1851, Peter Warburton, the Commissioner, was asked for a report which concluded with the comment that 'the police have more police duties than they can well get through and it [was] not to be expected that they can, while numerically so weak, do firemen's and police duties.'

Having drawn too many blanks in the lottery, the fire assurers became restive of maintaining reels and hoses unassisted. Assistance was forthcoming in the 1850s when the Adelaide corporation provided 'an admirable engine' in the form of a corrugated iron tank and cistern mounted on a cart body with a force pump to which was attached a long leather hose and a ladder.

The assurers protested against the use of calico, canvas and paper partitions in buildings and wooden roofs and, when Adelaide awoke on a morning in February 1858 to a huge fire in D.& W. Murray's drapery emporium in King William Street, there were grave fears for the shingle roof on the Napoleon Bonaparte Hotel just across the lane, and a row of miserable shanties in the rear. Though the fire raged with 'surpassing fierceness' they were saved.

There were spry fellows in those days who recognised the value of publicity. In a conspicuous place on every house that was insured, the company affixed its metal plaque, resplendent with a crown or rising sun. The burnished plate, gleaming in the flames, was a cogent reminder of the value of insurance and a guide to the insurance man who rushed to the scene. If his plate was on the building he could work with a will to save it. If it were not the matter was of no concern to him.

Late in the 1870s the companies, further disgruntled at paying for the protection, not only of property in which they might be interested, insured or uninsured, approached the government, which had valuable property at stake, for aid, and the modern arrangements by which the companies, the government and the municipalities each pay a moiety was inaugurated.

An article on the ravages of fire in Adelaide over 100 years is in the Advertiser (special edition),
1 September 1936, page 71.

The presentation of Fire Brigade long service medals is reported in the Register,
13 June 1904, page 8e.

"The Corporation and the Fire Brigade" is in the Register,
8 February 1876, page 5a.

A fire at the old West Terrace steam flour mill is reported in the Register,
20 April 1876, page 5d.

Information on the Adelaide Fire Insurers' Association is in the Register,
10 April 1880, pages 4f-6b.

A sketch of a fire in Rundle Street Street is in the Pictorial Australian in March 1882, page 37.

A fire at Burford's Soap Factory is reported in the Chronicle,
3 December 1887, page 6a.

"The Adelaide Fire Brigade - Its Efficiencies and Its Drawbacks" is in the Register,
9 and 30 January 1892, pages 6c and 4g.

A "novel" telephone apparatus devised by the superintendent of the brigade is discussed in the Observer,
16 November 1895, page 33e.

An interview with the Chairman of the Fire Brigade is in the Advertiser,
22 June 1898, page 5h.

A photograph of Nellie Melba at the fire station is in The Critic,
22 November 1902, page 4.

"Fire Prevention - Lack of Precautions at Public Institutions" is in the Express,
2 February 1903, page 4f.

The presentation of Fire Brigade long service medals is reported in the Register,
13 June 1904, page 8e. Fire prevention is discussed in the Advertiser,
29 September 1904, page 4d.
"Protection Against Fires - An Invaluable System" is in the Express,
21 December 1904, page 1f.

Photographs of the testing of extinguishers are in The Critic,
15 July 1909, page 19.

A fire at the United Service Club Hotel is reported in the Observer,
29 April 1922, page 7d.