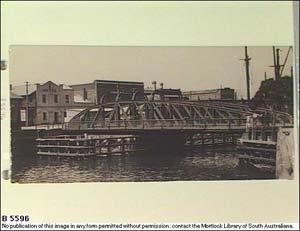 By 1873 the bridge had further deteriorated:

[Its] weather-beaten supports, swelled joints and strained back have borne so many insults and such loads of carts and contumely till it groans have, we hope, at last touched the hearts of an unfeeling government... There is a fine expanse of water southward of this tottering old pensioner...
(Register, 24 November 1873, page 6c.)

Not even the lightest-footed can pass over the Port Creek Bridge without hearing [it] creak, and its shakiness is not its only fault. The roadway is so narrow that two vehicles cannot pass each other...

The dredges are gradually approaching the bridge and when the work is continued within five feet of the footway the erection at that point must tumble...

By 26 February 1876 (see page 5d of the Register) the situation was such to prompt a statement that "the traffic which is now passing over the bridge is attended with imminent danger..."

Information on Tucker Bridge is in the Register,
7 January 1897, page 5c.

A proposed bridge to Birkenhead is discussed in the Express,
31 August 1900, page 4b.